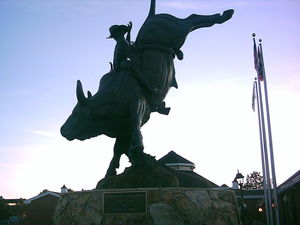 Lane Frost was a rising star in bull riding who won championships at rodeos across the West during the 1980s. He was the sixteenth ranked cowboy in the nation in his first year as a professional bull rider, at age nineteen, and in the top fifteen every year after that. He became the world champion of bull riding at the age of twenty-four, but his promising career was cut short two years later when he was gored by a bull at one of the most famous rodeos of all, the Cheyenne Frontier Days, in 1989.