From "june Bug" To "magic", Chronology, Taking Off, Awards And AccomplishmentsCONTACT INFORMATION 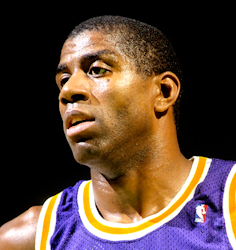 Had Earvin Johnson's earliest nickname stuck with him, he would be known today as "June Bug" rather than "Magic." A reference to his childhood proclivity for bouncing from basketball court to basketball court in search of a game, Johnson's later nickname gained preference when, as a high school player, his superior skills began to earn him acclaim. Magic continued to dazzle through his days at Michigan State University and in twelve years with the championship Los Angeles Lakers of the National Basketball Association (NBA). With his friendly demeanor and infectious smile, he shone as much off-court as on, becoming one of the world's best-known, and most well-loved, sports figures. Personally and professionally, he seemed unstoppable. In 1991, however, came an overwhelming test of this belief. At a November 7, 1991 press conference Johnson announced that he had contracted the Human Immunodeficiency Virus (HIV), which leads to the incurable, fatal Acquired Immunodeficiency Syndrome, or AIDS. True to form, Johnson has faced this obstacle head-on and with optimism. While he retired from the NBA following his announcement (returning for a brief stint in 1996), he has focused the same unyielding drive and buoyant energy he displayed on the court into numerous business ventures aimed at revitalizing largely African American areas of the nation's cities. In addition, he has become an unofficial spokesperson for HIV and AIDS awareness, promoting disease prevention measures and railing against the stigmatization of those who are afflicted. Twelve years after his announcement, Johnson still shows no signs of AIDS himself, and remains as energetic and focused as ever.