Early Years, A Prison Education, Chronology, Awards And Accomplishments, The Promoter, Rumble In The Jungle 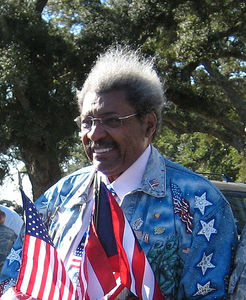 With his trademark "gravity-defying" hair, the image of Don King has hovered over professional boxing since he helped put together the "Rumble in the Jungle" in 1974, in which Muhammad Ali regained his championship title from George Foreman. All the elements that have marked King's career came together in his first big match: brilliant showmanship, the ability to massage outsized egos, and shady financing that left a number of people—though not Don King—unpaid and unsure where the money went. Since then, King's legend has grown to the point where his own fame, with a few exceptions, eclipses the various heavyweight champions and challengers he's promoted.