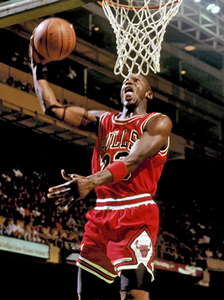 Michael Jordan is considered by many to be the greatest basketball player in the history of the game, even by some to be the greatest player of any sport. As Jerry Sloan, the coach of the Utah Jazz told the Daily News of Jordan, "I think everybody knows how he should be remembered, as the greatest player that has ever played." A two-time Olympic gold medal winner with the U.S. basketball team, Jordan distinguished himself in a 15-season career with the NBA by, among many other achievements, leading the league in scoring more seasons (10) than any other player in history, and by setting a record for the most consecutive games scoring more than nine points (842 games). He started his career with the NBA during the 1984-85 season, playing as a guard for the Chicago Bulls until 1993, when announced the first of three retirements. He went back to the Bulls in 1994-95, "retired" again in 1999, and went back to the game, this time with the Washington Wizards for the 2001-02 and 2002-03 seasons. In 2002, at the age of 39, he announced his intention to quit playing for good after the 2002-03 season.