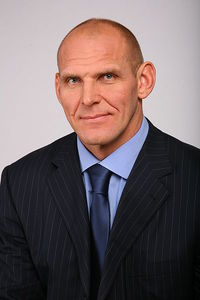 Russia's Alexander Karelin is the most successful Greco-Roman wrestler of the modern era, having won twelve European Championships, nine World Championships, and three Olympic gold medals during his reign. Karelin's dominance is unparalleled: he won every match he entered for thirteen years and went ten years without giving up a single point. He also is an opera and ballet aficionado, a student of great literature, and a member of his country's parliament. Karelin is so loved in his homeland that Russia mourned his loss in the 2000 Olympic finals, his first and only defeat in international competition. It's even been suggested that the 6-foot, 4-inch, 286-pound Renaissance man could someday become Russia's president. "You consider this ancient sport and this monumental man who's had a perfect career," said NBC commentator Jeff Blatnick, himself an Olympic gold medalist who lost to Karelin in 1987, "and the only thing you come up with is that he is what Hercules was to the ancient Greeks."