The Guarantee And Super Bowl Iii 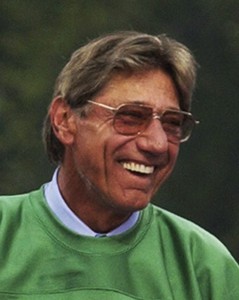 After his record setting performance in 1967, Namath followed with a more conservative approach that had sportswriters scratching their heads. With a more complete supporting cast the Jets were poised to make a run for the Super Bowl. The game, a new phenomenon resulting from an agreement between the two leagues to match their two best teams in a battle for bragging rights, was the first step toward their eventual merger. The AFL, however, was considered the lesser league because of its wide-open style of play and characters like Namath. The league had suffered defeats in both of the previous Super Bowls to Lombardi's Packers and with Namath's Jets pitted against the ultraconservative powerhouse Baltimore Colts in Super Bowl III it was widely considered a fore-gone conclusion. The Colts, with crewcut quarterback Johnny Unitas, represented the old NFL and the Jets with their young brash quarterback, the flashier AFL.

The Jets were seven-point underdogs going into the game in January 1969. Namath, frustrated with the lack of respect given to his team, guaranteed a victory before the game. "I try to explain that it wasn't an arrogant line, it was an angry one," Namath has said. "I was at the Miami Touchdown Club dinner at the Miami Springs Villa, and I was up at the mike, and someone yelled something nasty from the back and I said, 'Wait a minute, let's hold on. You Baltimore guys have been talking all week, but I've got news for you, buddy. We're gonna win the game. I guarantee it.'" The quote set off a media storm and the stage for what has become one of the most memorable Super Bowls in the game's history

The Jets made good on Namath's promise picking apart the Colts for a 16-7 victory in which he completed seventeen of twenty-eight passes for 206 yards. His offense dominated the Colts and the defense sealed the victory intercepting the Colts three times in the first half. The image of "Broadway Joe" trotting off the field after his team's shocking victory would be forever burned into the memories of football fans everywhere. "I got letters from a lot of high school coaches who told me they used the game as a motivator," Namath said. "Maybe it motivated some other people, too. There are a lot of underdogs in the world. Maybe it meant something to the underdogs in life."

The AFL and the NFL merged during the off-season and Namath once again made the papers. He was offered an ultimatum by Football Commissioner, Pete

Rozelle. Rozelle demanded that he sell his nightclub, because of the "undesirables" that frequented the establishment, or face indefinite suspension. Namath responded by announcing his retirement from football at the age of 26, saying he had to follow his conscience. Although he would reconsider and sell the club in time to participate in training camp, he felt the agreement went against his instincts.

Namath would stay with the Jets through the 1976 season without ever again reaching the heights he had achieved so early in his career. Because of chronic injuries and his advancing age the Jets placed their super-star quarterback on waivers after that season. Picked up on waivers by the Los Angeles Rams, he played for one more season before retiring at the age of thirty-four.

Thank you, Jim. Members of the clergy, Honorable Mayor, newly inducted members of the Hall of Fame, distinguished guests and ladies and gentlemen. I am sure it is the dream of every professional football player to some day be inducted into the Hall of Fame. Today that dream comes true. Gentlemen from the City of Champions, Beaver Falls, PA., let me congratulate all of you. Joe, the people of Beaver Falls and Beaver Valley want you to know they are very proud of you especially for not forgetting where you were born and raised. I am also sure the late Coach Paul Bryant is somewhere up there looking down today wearing his famous hounds tooth hat and if he could send you a message he probably would say in his deep southern voice, "way to go Joe, be brave." Joe, I want to publicly thank you for selecting me to introduce you today. This was one of the greatest events of my life. Again, thanks Joe.

If I had to choose one word to describe the fabulous career of Joe Namath, that word would be confidence. When Joe played football for Beaver Falls High School, the entire football team believed whatever play Joe called it would work, they would make it work because they knew Joe had confidence in them. A few years later, when Joe was playing professional football for the New York Jets, and the Jets were playing the Baltimore Colts in Super Bowl III, Joe made this statement, "I guarantee we will beat the Colts." This was not a cocky, or brass statement. The Jets were a 17-point underdog, but again, when Joe said we could win, his teammates believed they could win.

Just like in high school. The Jets did win that Super Bowl III and pulled one of the greatest upsets in modern football. Incidentally, the quarterback of the Colts that day was Johnny Unitas, Joe's idol in high school. Joe even wore number 19 in high school and that jersey will be included in the Hall of Fame, thanks to the late Athletic Director, Bill Ross. If Joe continues to have that same kind of confidence in his new field of entertainment, maybe someday we will be watching the Academy Awards program and the emcee will say, "the envelope please and the winner is ladies and gentlemen, Joe Namath."